No I don’t listen to their wasted lines

Stiff had Croydon’s Drug Addix in to do a demo session, but weren’t convinced by the results; when they heard that Kirsty had left the band (“just because it wasn’t any good. It was pretty awful, and I was the token girl”), she was invited back. “‘We’d like you to come and play us anything you’ve got.’ I said, ‘I thought you didn’t like the demos;’ and they said ‘We hate the band, but we quite like you!’ When they asked if I had any songs, I said ‘Oh yeah, loads!’, even though I didn’t at all. Then I thought, ‘Oh God, I’d better write something before I go in to see them.’ And that’s when I wrote ‘They Don’t Know.”

Dave Robinson liked the song, wasn’t sure about her voice, hut decided to stick her in a studio anyway, around Xmas 1978. Kirsty was backed by the Edge, which at that time included guitarist Lu Edmunds (fresh from a spell with the Damned), keyboard player Gavin Povey and drummer Jon Moss.

Of Tracey Ullman’s version, she later said “Once a song has been recorded, it’s no longer down to the writer to decide who does it anyway. So anyone can record any song they’ve heard that’s been published. A lot of people do know my version which was a big airplay hit in 1979. It was number two in the airplay charts between Wings and Abba so I think quite a few people heard it. But it didn’t really bother me (when Tracey had the hit version). I don’t mind a bit of reflected glory!”

“It was actually suggested by a friend of mine who worked at Stiff Records. I was on Polydor at the time and having a really bad time with them and I was sort of thinking about selling up everything I had and moving to Spain and being a hippie. My mate suggested that because Tracey had this big hit with her first single, which I think was ‘Breakaway’ – she’d had a much bigger hit than they had expected – and they didn’t have anything else to follow it up so they were looking for material. And basically they thought, I’m there writing the sort of songs that she wants to do and it seemed like a good partnership. I’m grateful for (Tracey) paying the rent! It was fun; it was good.”

The song shows up on a 1992 Rhino Records compilation called ‘Stiff Box’ which fills up 4 discs with the best of the Stiff recordings (including Tracey Ullman’s 17 PLACES). Also on ‘Indie Scene 1979’ with the Damned, Lene Lovich, the Monochrome Set and Big in Japan, ‘A Hard Night’s Day (A History of Stiff Records)’, and on the Union Square 2002 release ‘Songbirds’

This song has been covered so often it has its own covers page! However, we single out Tracey Ullman’ original hit version.

Tracey Ullman took ‘They Don’t Know’ to Number 2 in September 1983 (and US #8). Phil Chapman, the engineer who mixed Tracey’s version, had this to say in a newsgroup reply:

“I’ve listened to the two and the backing tracks are similarly arranged, but not identical. Tracey’s is a semitone up on Kirsty’s, and, although Kirsty re-sang the backing vocals (the harmonies on the last verse are different), neither of them could get the ‘Baby’ to sound as good as Kirsty’s original, so it was pitched up and ‘flown in.

I may well get corrected on this next point: Although the early TU tracks were recorded with live musicians, the later ones were played to drum machine, sometimes not adding a real drummer. Both versions of TDK sound like they could be machines (the snare sound is pretty consistent), in which case it could be the same basic programme with a different bass, guitar and piano.

Another of my habits from the early days was to mix for radio, usually monitoring through a single loudspeaker in mono. Consequently anything to the sides came out a little louder when listening in stereo, and I kind of like that. Also, TDK is three part harmony, if you include Tracey’s melody as the middle part, and I guess I must have balanced them equally (so Kirsty’s background vocal appears as prominently as Tracey’s lead)”. 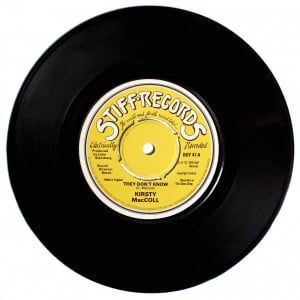 Live at the Fleadh