It was Christmas Eve babe
In the drunk tank
An old man said to me, won’t see another one
And then he sang a song
‘The Rare Old Mountain Dew’
And I turned my face away
And dreamed about you

You were handsome
You were pretty
Queen of New York City
When the band finished playing
They howled out for more
Sinatra was swinging,
All the drunks they were singing
We kissed on a corner
Then danced through the night

* in a recording for the TV programme ‘Top of the Pops’ in the UK (with Shane McGowan), Kirsty changed the lyrics slightly to ‘You scumbag, you maggot, you’re cheap and you’re haggard’ – wording which was later used by Maire Brennan in Ronan Keating’s cover version.The Guardian published a fine piece about the song in 2012.

There are so many of these they have their own series of pages … there are many many more out there!

It has also appeared on ‘Now That’s What I Call Music Vol. 10’ (1987) and ‘This is the 80s’, one of a recent glut of 80s nostalgia collections which are springing up everywhere. One of those lovely duets albums: ‘Together: 38 Classic All Time Duets & Collaborations ’ (2002 Universal, George Michael & Elton John, Joe Cocker & Jennifer Warnes, Marvin Gaye & Kim Weston,‘’ Clannad & Bono). Peculiarly it also appears in karaoke form on ‘Italian Love Songs’. 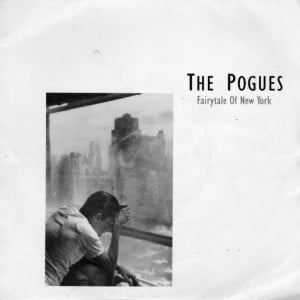