With the support and blessing of Kirsty MacColl’s family and management, a proposal was put to Westminster Council to place a Bench in Kirsty’s memory in Soho Square, central London. Soho Square is a garden in the middle of one of London’s busiest areas. It has a special place in the hearts of Kirsty’s fans as the setting for a song on the Titanic Days album: it’s where “the pigeons shiver in the naked trees” and there’s “an empty bench in Soho Square”. Kirsty once said that had she appreciated the special fondness for this song amongst her fans, she would have included it on the Galore compilation. The Bench was unveiled in a public ceremony in Soho Square, London on Sunday 12th August 2001 at 11am. Speeches at the unveiling came from organiser Chris Winwood and Kirsty’s mother Jean, who handed over the cheque for the Music for Cuba Fund to Steve Wilkinson of the Cuban Solidarity Campaign and the Cuban Ambassador to Britain. Kirsty songs were played over a PA system to add the necessary ambience. As the song Soho Square finished, two pigeons flew over the bench.

Some extracts from the speeches:

Chris Winwood, bench project organiser, said “Kirsty MacColl once sang about Soho Square: with pigeons shivering in naked trees, it’s a sad place. there’s an empty bench in Kirsty’s Soho Square, if we’d have come, we’d have found her there. I don’t think this is either the time or the place to mourn, or to dwell on Kirsty’s passing. I know that, no matter how upset and shocked we fans were, we cannot compare with the experience of those who knew Kirsty. However, Kirsty’s death led to a real sense of community among and shared experience the fans.”

“Using Kirsty’s website, fanzine and internet chat group, fans from across the world pulled together and became friends. Meeting so many fans at Kirsty’s memorial service in January was so exciting. After the service, we sat in the pub, had a giggle and sang bits of her songs. we talked about our favourite and least favourite of Kirsty’s lyrics, and celebrated everything she’d done. The idea to make Kirsty’s bench a reality came from that. We all said it would never happen. We wanted a permanent, lasting memorial, not just another blue plaque on a wall somewhere.”

Jean MacColl, Kirsty’s mother, said “I’m so thrilled to see you all here, your love and affection and kindness and your solidarity has been so supportive of all the family, and I do thank you, really, from the bottom of my heart. It helps a lot. You’ve been most generous, and I’m sure Kirsty would be amazed at how many friends and fans she had, and I can’t thank you enough. I think this is a wonderful place, and I’m sure she’s looking down and having a little smile somewhere, and I shall come and sit on the bench. If I get down, this is where I shall come.”

A decent turnout of 150 consisting of fans, family & friends plus the occasional passing tourist ignored the rain and celebrated Kirsty’s memory in the Square before heading to the excellent, welcoming and acoustically rocking Pillars of Hercules after a brief attempt to enjoy the day in another establishment ended in a mass walkout of Kirsty fans and relatives.

Once safely in a decent pub, the Kirsty songbook (and the Bragg one, thanks to Terry!) was comprehensively sampled to varying degrees of accuracy in a touching display of community singing, fed by the guitar lines of star contributors John “Aloha” Meranda, Craig “Buskin'” Ferrier and Terry “where’s Wiggy?” Hurley. Old friendships were renewed and new ones started. 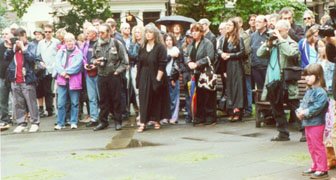 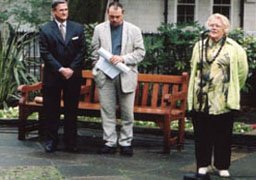 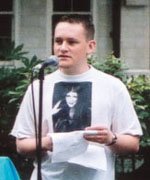 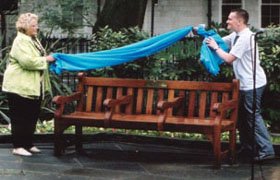 Many thanks to Eddi Reader and Sincere Management for their help with promotion.

Many thanks on behalf of Kirsty's family and everyone involved in making the bench happen to all who have contributed - by sending donations, attending the unveiling or both.

Every year on the Sunday closest to 10th October (Kirsty's birthday), a merry band of Kirsty's fans, friends and relatives congergate at the bench at noon, before adjourning to a nearby hostelry to remember Kirsty and her songs in a most convivial atmosphere, all are welcome. 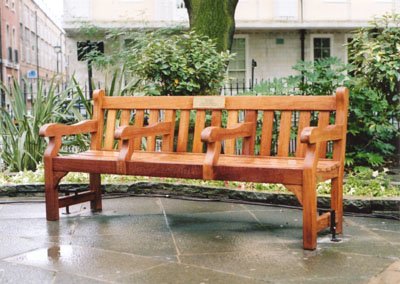 all I ever wanted
FREEWORLD