LONDON Greenwich Up the Creek

June 16, 1999. Charity gig : Kirsty played with Glenn Tilbrook alongside some comedians in a benefit for something I have now forgotten. It was a lot of fun according to Janis and Mark.

“Always good to Glenn see on home turf especially tonight with the wonderful Kirsty MacColl. Malcolm Hardy, proprietor of said venue, did his usual MC routine introducing first, two local stand up comedians. After the interval on came Mr Tilbrook started with a Smokey Robinson song ‘Tracks of my Tears’, he sang lead whilst the audience were invited to be the Miracles doing backing vocals. He had to stop singing several times whilst he reminded the audience of how the song went. Then on came Kirsty MacColl, Glenn remained on stage to accompany her on vocals and guitar. They did a load of her stuff: ‘They Don’t know’, ‘Days’ (the Kinks cover), ‘Don’t come the Cowboy with Me Sonny Jim’ as well as an Everly Brothers‘ cover which Glenn was unfamiliar with before they had started rehearsing it in Kirsty’s studio.

There was great banter between the two throughout the evening, Glenn worried about their guitars being in tune and a particularly lovely moment when Kirsty introduced a song by saying ‘Tonight Mathew I‘m going to be…‘ then turned to Glenn and said they‘ve never done me on ‘Stars in their Eyes‘ have they done you? Glenn replied somewhat sheepishly that he was afraid they had.

‘Kirsty MacColl has a gorgeous voice and it combined really well with Glenn’s especially on their cover of the Elvis (Presley) song ‘Always on my mind‘. I reckon they could release that as a single. Another cover was the Frank and Nancy Sinatra song ‘Something Stupid‘. The encore was a rocking version of ‘There’s a guy works down the chip shop swears his Elvis’.” Source: PG

July 19, 1999. Charity gig with Glenn Tilbrook & Billy Bragg (separately)
KM & Tilbrook: ‘Days, There’s A Guy Works Down The Chip Shop, They Don’t Know ’and covers of Beatles classic‘ If I Fell, Always On My Mind’ + an unspecified Everly Brothers song..

Kirsty teamed up with Glenn Tilbrook of Squeeze at Camden’s Jazz Cafe for a one-off performance. It was a benefit organised by comedian Jeremy Hardy to raise funds for the legal costs of the family of Robert Hillman, an Irish Catholic “kicked to death in 1997.”

DUBLIN HQ at the Irish Music Hall of Fame

For a performer with such a diverse body of work behind her, this new band seems to be an attempt to consolidate her various influences, including Latin, country, torch songs and others. The voice is as beautiful as ever, while the songs are about lost love. If she doesn’t actually hate men, it appears that, at the very least, we’re a disappointing bunch. Whether tongue-in-cheek as in ‘England 2, Colombia 0’, ‘It might have ended badly but you never really had me’ (sic), or heartfelt, ‘You threw me the cliche that we’d still be friends, but my friends are people who love me, not like you’ she sings with real conviction in ‘Wrong again’.

Infectious dance numbers include ‘Celestine’, a jokey brass-powered workout, and the band even manage to inject the Ray Davies tune ‘Days’ with a Latin swing feel that, against the odds, makes perfect sense. By the first encore the punters are dancing in the aisles, and she returns to the stage twice more. It seems that in this incarnation MacColl has decided that ‘New England’ is old hat. Or should that be old sombrero?” Stephen Robinson (Hot Press). Photo: Cathal Dawson’ 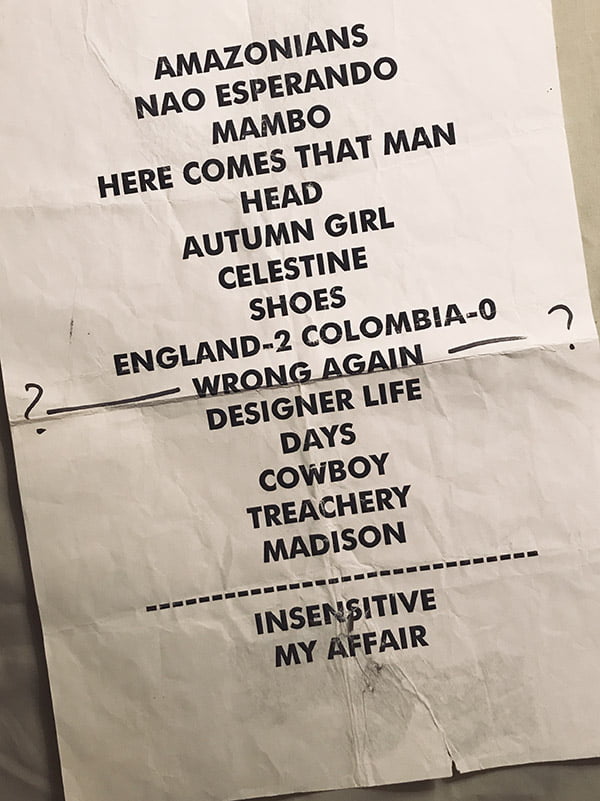 These were the first proper shows in years for London. This was the first chance to hear the new material so expectations were high. Kirsty was in fine voice despite suffering from a sore throat for the past week, I was really impressed. A rousing start to an evening of largely unaired material with the mighty ‘Amazonians’. I seem to remember it as something the Pogues would enjoy. In keeping with the musical textures which Kirsty is using at the moment the band was put together with a sublime ability to throw all manner of Cuban/Brazilian style rhythms and brass shapes. ‘Não Esperando’ followed with its slinky groove leading on to the forthcoming single ‘Mambo de la Luna’. Don’t be afraid of the rhythm, it takes you to where you want to be. Having been overtaken by all sorts of other “Mambos“ in the charts let’s hope it gets the exposure it deserves. More reflective moments came in the form of new songs ‘Head’, ‘Autumn girl’ and the most gorgeous desperation of ‘Wrong again’.

Two of the best of the new batch are the fabulous ‘Celestine’ (about Kirsty’s “alter ego“, the wild and wicked slut) and likely future single ‘In these shoes?’ laced with humour and featuring glorious horn section highlights from the incandescent trio of Joe de Jesús, Ben Storey and James Knight. ‘Designer Life’ is a casually languid condemnation of anyone who lives for a label and is sung over a delightfully paced Samba rhythm (I think). Late in the set we found some old favourites in ‘Days’ and ‘Don’ come the cowboy’ before returning to the pleasures of the new material with the naughty ‘Here comes that man again’ promoting Anglo-Dutch relations, the blazing cannon that is ‘England 2 Colombia 0’ complete with sound effects from Colombian bass maestro Cucho Merchán and ‘Treachery’ where James, Ben and Joe really cranked it up leading into a storming ‘Walking down Madison’ with old hands Pete Glenister and Dave Ruffy going for broke. For encore we had the Antonio Carlos Jobim song ‘Insensitive’ accompanied only by the sensational Michèle Drees on Brazilian guitar. Throughout the rest of the set Michèle was a powerhouse of exotic percussion. Final word was ‘My Affair’ (captured for later release on the cd single for ‘In these shoes?’) which should have left only sad cases longing for the rest of ‘Galore’ disappointed as they departed into the fine London night.

I‘m not sure the crowd knew what to expect, and some complained that there were too many songs they didn’t know. Shame on them. Hearing the new songs live, the collective set increasingly sounds like it will be a terrific album in its completed form. The songs are consistently strong, hardly ever miserable and Kirsty and band have succeeded in capturing some great rhythmic moods for want of a better expression. OK I‘m biased and was familiar with much of the set beforehand so by way of balance I had another music fan with me on night who didn’t really know much of Kirsty’s work and he really enjoyed the gig.

Support was by Imelda (presumably Imelda May, who went on to some success a decade later?), described by someone as a strange blend of Bessie Smith and rockabilly. Her brief set was pleasing enough if unspectacular. Sadly I can’t remember the songs.

Kirsty appeared on GLR (Greater London Radio) being interviewed by Sean Hughes on the 12th.

DUBLIN HQ at the Irish Music Hall of Fame

As part of a December radio gospel concert, Kirsty sang the Isley Brothers’ classic ‘Harvest for the World’.

Kirsty appeared on BBC Radio with Janice Long around this time.