This page will take a while to load, please be patient. Chip Shop impersonators listened in order of appearance. The mighty, the questionable and the downright obscure for your enjoyment! Take your time, this is one popular song. We were going to be selective but that would spoil the fun! Studio mixes, bedroom strummers, actors, even karaoke, German versions, Swedish versions, they are all here. The live versions are now so many they have their own page.

Germany offers Gunter Gabriel’s ‘Heute Trinken Wir auf Alles, was wir Lieben’, which translates as ‘Today we’re drinking on everything we love’ so no straight cover from our Gunter. On being told about this one, Kirsty said ”What A Laugh!”. Audio only.

‘Heute Trinken Wir auf Alles, was wir Lieben’ again, possibly our favourite version of them all!

Maggie Mae (1981) Another German language cover comes from Maggie Mae with ‘Und der Weihnachtsmann Nehauptet, Er ist Elvis’. This translates weirdly as ‘And Father Christmas is claiming he is Elvis’.

From her album ‘Oma Tie’.

Mini-Pops was a television series broadcast in 1983 on Channel 4. For younger viewers, it consisted of music performances on a brightly coloured set, featuring children singing pop music hits of the time as well as older classics. The children were usually made to look like the original performers, including the clothing and make-up. An album came out in in 1982 on K-Tel including Kirsty’s song! 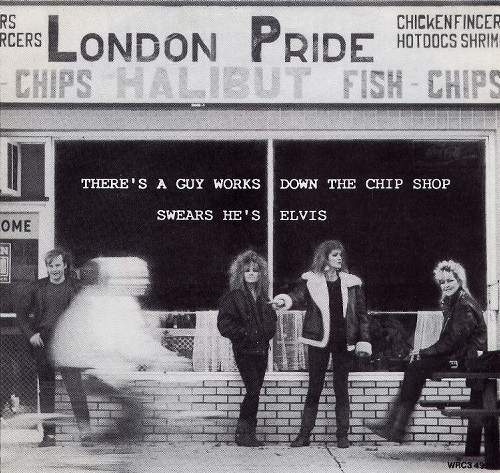 Sweden cover translated as ‘Killen Nar Pa Konsum Svar Att Han Ar Elvis’. Elisabeth was half of Eurovision outfit Bobbysocks – she also represented Norway in 1994.
All I can find is this drum video to the track from Jockaere!
https://www.youtube.com/watch?v=innbFokl51I

This time, be different, …

Just a short clip of Australian Karen White in action.

It’s Jonathan Ramsey breathing fresh life into the great pantheon of Chip Shop covers! You can find him at jonathanramsey.com.