Although Kirsty had long since departed Polydor for a second stint at Stiff (“better the devil you know” she claimed), with ‘A New England’ riding high in the singles chart, Polydor hastily put together a rehashed version of Kirsty’s 1981 ‘Desperate Character’ album, chopped a few songs off it and substituted three songs from the Dave Jordan produced ‘Real’ sessions – ‘Annie’, ‘Berlin’ and ‘Roman Gardens’The “new” songs were indicative of a new Fairlight synth sound which would have been well in keeping with the mode of the early eighties. Sadly but not uncommonly, the project was left to rot and never has seen the light of day (although other songs have since appeared, ‘Sticked and Stoned’ and ‘Camel Crossing’, released on the box set ‘From Croydon to Cuba’).

As Kirsty explained to Record Collector magazine in 1994, “When we got to the end of the recording, I realised that nobody from the company had been down or asked to hear the demos. It was obvious that they weren’t interested. Then they just dropped me. I was left with a finished album that wasn’t coming out. and that does your head in. It’s like having a baby and then leaving it in a phone box.”

The article goes on intriguingly, “That wasn’t the end of the story. When MacColl hit another purple patch a couple of years later, Polydor jumped on the bandwagon, unearthing several of the tracks for the cash-in ‘Kirsty MacColl’ album. These tracks, ‘Roman Gardens, ‘Man With No Name’ *, ‘Annie’, ‘Keep Your Hands Off My Baby’, ‘Berlin’ and ‘Sleepless Nights *’, were blended in with the Beach Boys cover and material originally released on ‘Desperate Character’. At one stage, Polydor had planned to call it ‘Kirsty MacColl’s Greatest Hits, but the singer complained. “I only had ’‘Chip Shop’“! I said ‘You can’t call it that.’ It was a complete mish-mash. The first album material was pub-rock, rockabilly-ish, while the second was much more techno: there was a lot of programming on it.”

“Worse still, the first album artwork was retained, so none of the musicians who worked on ‘Real’ – including bassist Pino Palladino and Lu Edmunds, who co-wrote several of the songs – was credited.” In fact, Polydor didn’t even bother to send a copy to Kirsty – “A friend of mine heard the schizophrenic record in a restaurant. They were just cashing in on A New England being a hit … ”

* This is interesting detail, since the only copy of this reissue we have found has the track listing as shown on this page – most notably it does not have ‘Man With No Name’, ‘Sleepless Nights’ or ‘You Still Believe in Me’. We have reason to believe that the version referred to does exist as Polydor SPELP95B, based on the evidence of a collector. Unfortunately the exact track listing remains unknown. It has a sticker which reads “Kirsty MacColl Special Edition: includes two extra tracks off the unreleased album ‘Real'”. Please let us know if you ever find one! The cover artwork is, we believe, inverse video. Source: CW2

It was apparently the intention to issue a single to accompany this, with an 10″ acetate existing of ‘Teenager In Love’ backed with ‘Falling For Faces’ – see it at discogs. 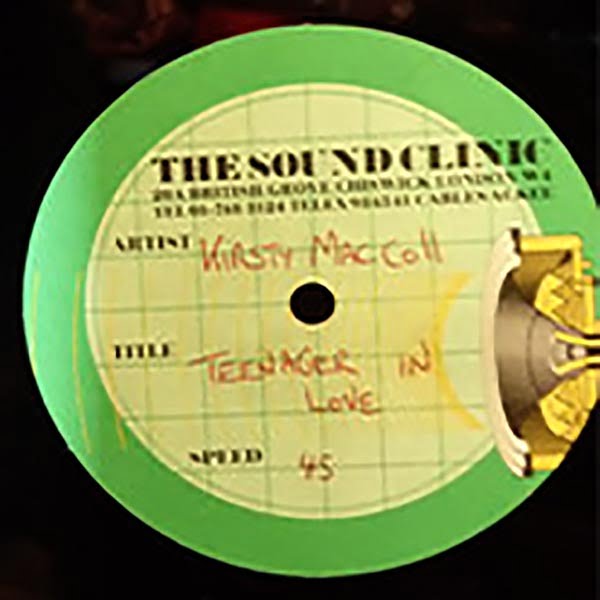