A star studded tribute concert was held in London featuring a variety of artists performing Kirsty’s songs, and a handful of songs which Kirsty made her own.

On an emotional evening, this show was performed with such passion and gusto that it made us feel her absence more than ever. It was also of course an exhilarating opportunity to celebrate.

After years of performing in rather less grand settings, how she would have loved this! Her very own “tribute band” in the gorgeous setting of the Royal Festival Hall in London. with its players at the top of their game, an array of wonderful singers and ticket touts outside asking three times face value for the handful of briefs they’d managed to pick up. That’s Kirsty on the South Bank.

BBC 6 music covered the event. On 23rd Sept 2002, Janice Long presented “Thank You For The Days”, celebrating Kirsty’s career in the words of her friends and contemporaries. The next evening, Phill Jupitus presented an edited broadcast of the RFH concert (apart from his own fifteen minutes!).

Eliza Carthy wrote in the Observer that her favourite happening in 2002 was “the Kirsty MacColl tribute at the Royal Festival Hall. Having never looked at Kirsty’s work seriously before, I hadn’t realised what a talent she was, and what fantastic musicians and friends she had around her. I was proud to be there to celebrate such a unique person.” Source: WE.

Brian Kennedy wrote website, “She was a brilliant woman, you know. I was very privileged to be her friend and obviously the loss still goes on. Every now and again I hear her on the radio and I think God I must ring her and then of course you remember that she’s just not there. It’s so weird. Again very privileged to be part of that celebration of her life that night in London.”

In 2010 they got up and did it all over again at the Concert for Kirsty MacColl. 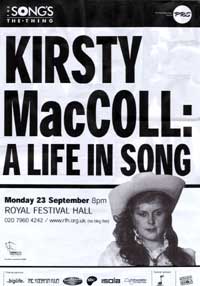 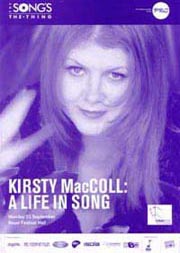