Fan finds his Kirsty picture on the internet … after 20 years 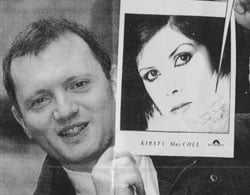 A bizarre twist of fate has reunited music fan Tony Cowdrill with a picture signed for him by the late pop star Kirsty MacColl 20 years ago.

The photograph, carrying the message “To Tony, Love Kirsty”, never reached him in 1981 because it went missing before he had a chance to collect it. By chance, Tony heard from a friend that it had shown up on the internet auction web site eBay and was about to go under the hammer. The 37-year-old had just an hour and a half to get to a computer, log on and stop the precious item of memorabilia being sold to a rival fan.

Tony said “I ran to the Central Library to try to register as a user, but couldn’t do it in time. With about seven minutes to I managed to get an e-mail to someone who was able to make a rival bid for me. I was really nervous waiting to find out if I’d got it and couldn’t believe it when I had.”

Tony, a council worker from Great Barr, said Kirsty had left a picture for him in a former Virgin store in Bull Street during a visit to Birmingham. He said: “We had started writing to each other after I contacted her when her first single came out in 1979. She was such a nice person that she always replied to my letters and would send me postcards. One day she sent me a note saying she’d left me a signed picture in the Virgin store. When I got there they said they didn’t know anything about it – I thought that maybe there had been a misunderstnding or it had been mispIaced. To say I was stunned when I saw it on the internet all those years later doesn’t even cover it! It’s definitely the same one because it’s got my name on it and a picture of her single.”

Tony’s discovery, which cost him just over £19, came almost 12 months after Kirsty’s tragic death in a boating accident. He said: “It was one of those weird coincidences. It’s quite fitting that I’ve finally got it. I just wish I could write and let her know.”